Thank you for your patience while we retrieve your images.

It’s the day after Christmas as I write this, but the event happened yesterday, Christmas Day. I wanted to write all this down, as soon as possible, as it’s fresh in my memory. And if you don’t mind, allow me to ramble just a bit – this is nature photography-related. I always have mixed feelings about Christmas; at one level, there’s the holiday spirit that seems to wane a bit more each passing year. I don’t dislike Christmas or anything it represents, but everything around it seems to suck the joy out of the holiday (buying things, shipping things, standing in one line, then another – I got to spend two delightful hours of my life, that I’ll never get back, in the post office a couple of days before Christmas, and I still have a bunch of items I’ve not been able to ship yet). Fortunately, I’ve been MALL-FREE SINCE 2003™ (yeah, that’s right – I trade-marked it). Usually by the time Christmas rolls around, I’m exhausted and not particularly in a holiday mood. Not in actual Grinch-mode, just blah (my preferred term isweltschmerz, but so few folks are familiar with that term, I just use blahinstead).

In my aforementioned blah mood, I stole out of the house very early on a frigid, snowy Christmas morning, the family still snug in their beds, to seek out foxes. Foxes are a tonic for me, and spending time with them has a very soothing effect. My little fox hole is a wonderful place, with many foxes that are pretty habituated to the presence of people, but that doesn’t mean they’re always around or always cooperative. If you’ve kept up with some of my previous posts, you’ll know that there have been some huge changes in that park, including the loss of two of my favorite foxes. I won’t go too much into detail about that, except to acknowledge their loss as part of myweltschmerz. It’s only recently that the park and its residents have seemed to mostly recover from those changes.

It was still before sunrise when I arrived at the parking lot and set up my gear. I saw two other people who I greeted briefly (both, surprisingly, in a more blah mood than me, it seemed), and quickly started down the icy trail, tripod and gear over my shoulder just as the first rays of the sun broke the horizon. It was cold enough that the snow squeaked loudly under my shoes – I wasn’t going to be sneaking up on anything that morning. The sky was mostly clear, and the woods were bathed in a warm, golden light. Twenty meters from the parking lot and I was alone in a Winter Wonderland. I had to cross two wooden foot bridges on my way to my usual spot – a crossroad on the back trails. I’m usually fairly cautious crossing these – I had a spill near another of these a couple of years ago that nearly tossed me headfirst into the creek that runs through the park – and the bridges are frequently icy.

As I turned a corner on the trail, I noticed a fox curled up just outside the drainage system he uses as a den. It was the previous beta, now alpha male of the little area. He spotted me and quickly slunk into the den, disappearing from view. “Of course,” I thought. I went ahead and set up the tripod nearby, hoping he’d emerge from the den at some point so I could get a few images. I do like to take red fox images in the snow – their fur is puffy and contrasts beautifully with the snow this time of year.

He poked his head out a few minutes later. I wasn’t expecting too much from him. When he was still a beta male, he was very camera shy. He’s a good looking fox – classically handsome in a fox-way – but always camera shy and prone to hiding in the brush as the beta. It’s not unusual for me to talk to my subjects in as soothing voice as I’m able to muster; most of the time it doesn’t cause them to flee, and sometimes it even works to make them a little more relaxed. “It’s just me – I’m harmless. Just go about your business and I’ll stand over here and stay out of your way.” To my great surprise and delight, he hopped out of the den and sat by the den entrance. Then he curled up and took a little nap. He wasn’t completely asleep, as every time I made a small noise, or something else happened, one or both ears would rotate around in the direction of whatever noise caught his attention. He quickly adjusted to the sound of the shutter firing, and after the first few shots, he didn’t even bother turning his ears towards me at all.


For about half an hour, he napped, stretched, and quietly sat by the den, with me firing off images 10-15 yards away. The sun hadn’t quite crested the ridge, so he was still in very soft light the entire time we were together. Sufficiently rested, he stood up, stretched again, and slowly trotted off. I had filled an 8gb card by that time. “Thank you, and have a Merry Christmas!!”He turned around for a quick glance, and disappeared up the ridge and out of sight. At that moment, I was more relaxed and at peace than I can recall being in a very long time.
This was a blessing, a very special moment. I couldn’t have asked for a better Christmas gift, and I don’t mean the photo opportunity (although that was wonderful, too). I do mean being given the opportunity to spend a brief period of time in the presence of one of God’s wild creatures, who seemed very relaxed in my presence, to be able to share a moment in time, and maybe even be able to share a slight connection among another living, thinking, feeling being. 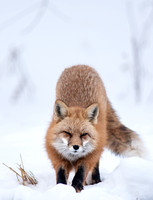 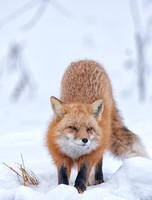 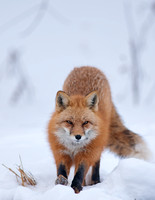 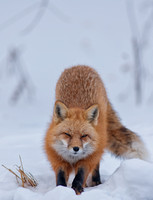